Swimming: Like the Pool, It’s Deeper Than It Looks

To the average spectator, swimmers are people who can just float above and maneuver through the water by moving their arms and kicking their feet. That observation scratches the surface of swimming however, it goes much deeper than that.

n float and move their feet up and down; they propel themselves through the water with strategic hand placement and body movement, requiring the awareness and participation of just about all of the muscles in the body. The poor handling of one body part could prevent a swimmer from moving through the water as efficiently as possible. An example of this would be swimming backstroke with the chin down. Floating is a necessary component of backstroke; there is no way around it. New swimmers are able to float more easily with their chins and bellies poked up towards the sky. Without proper technique, they would sink.

Freestyle is another stroke that requires proper body movement for effectiveness. The best freestyle swimmers win races by operating with straight arms and long pulls. A swimmer automatically faces resistance in the pool, but using one’s limbs and muscles to their advantage limits the effect of water resistance. The “long arms” that we teach our students to have when swimming freestyle are important, because they enable the swimmer to propel his or herself forward.

So sure, the non-swimmer is correct to say that swimmers move their arms and feet but it cannot stop there. We must acknowledge the immense effort of the aquatic athletes to control their body movement, to strategically place various body parts, such as the chin and the arms, while still appearing to swim seamlessly through the water. It’s deeper than a basic sport. It’s a skill for survival that requires technique and effort.

© We Aquatics. All Rights Reserved . 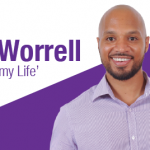 David Worrell: ‘Swimming is my Life’Blog